Snow days are the best thing to ever happen to a kid. It’s the only time children are given a free pass to skip school and play outside! However, schools aren’t the only places that shut down for snow days, and horsing around in the fluffy white powder isn’t a pastime that’s limited to rambunctious kiddos, either. When the Oregon Zoo in Portland was forced to shut down after the first blizzard of the season hit, the zoo’s resident critters literally jumped on the chance to have an all-out frolic fest! 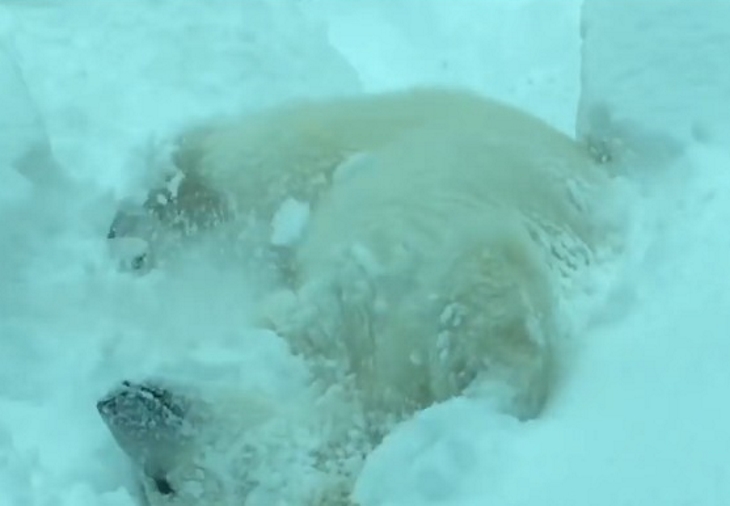 There was so much snow on the ground, that one of the caretakers had to ski into the zoo to check up on the animals. But, he needn’t have worried because they were already taking care of business! There’s nothing cuter than watching an animal in the midst of play, and although polar bears might seem big and scary, unexpected snow days bring out their inner child. The zoo’s adorable cub, named Nora, knows how to show off, and she quickly plops onto her back to make snow angels!

But, wait until you see Samudra, the zoo’s Asian elephant! As jungle and desert babies, elephants aren’t usually exposed to the pleasures of winter wonderlands. After Samudra wakes up to see what all his friends are hootin’ and hollerin’ about, all he sees is an endless white landscape. When he sniffs the cold air, it looks like he wants to go back inside and find someone warm to cuddle with. Watch the video below to see if Samudra takes a chance on the most wonderful day that nature ever created. Ha ha, his happy chuckling says it all!