> If you find a shirt ‘intentionally’ tied to your car’s windshield wiper – don’t get out to remove it!

Things are sadly not always safe for everyone out there, and women are particularly vulnerable to certain crimes.

As a woman, it’s not unusual for me to take extra precautions when I’m out and about, especially at night. I might ensure I am accompanied by a friend, and I’m conscious of my surroundings at all times.

This is exactly the approach Ashley Hardacre, from Michigan, USA, takes — and fortunately, her cautiousness came to good use recently.

After finishing a night shift, she walked out to her car in the parking lot. But it was only after getting into her car that she noticed that a flannel shirt was strangely wrapped around one of her vehicle’s windshield wipers.

She looked around and noticed that two cars were parked nearby. The situation struck her as suspicious so she did what her gut told her to do: she promptly drove away until she reached a safe place where she then stopped to remove the  shirt.

Ashley later recounted the incident on her Facebook page, warning everyone to be careful. Here’s what she wrote in the post.

“I got to my car and locked the doors behind me immediately as I always do and noticed that there was a blue flannel shirt on my windshield.

I used my windshield wipers to try to get them off but the shirt was completely wrapped around my wiper blade. I had seen posts lately about people finding things under their windshield wipers in the Burton/Flint area as an attempt to get girls out of their cars and distracted.

I don’t know why the shirt was on my car but it had to have been intentional the way it was put on there. I really can’t think of another reason as to why someone would put it on my car.” 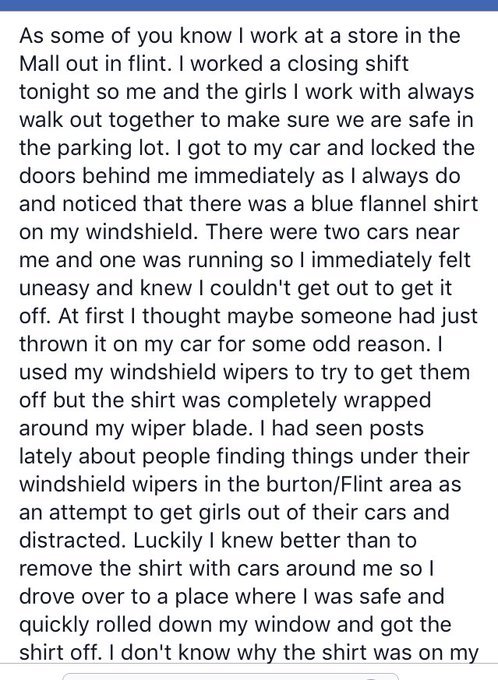 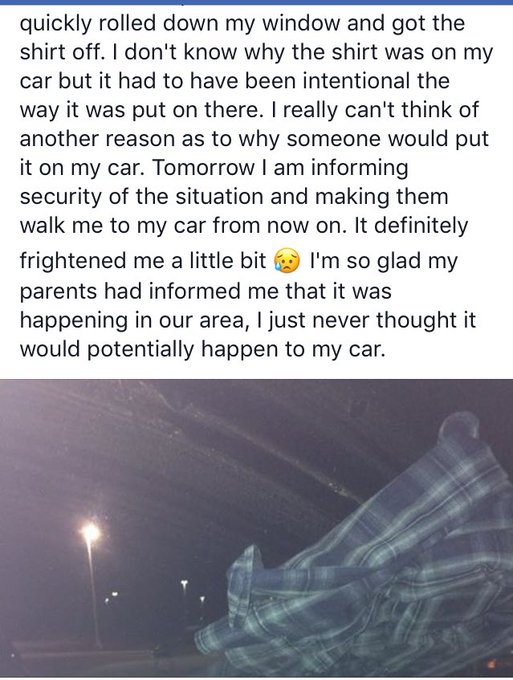 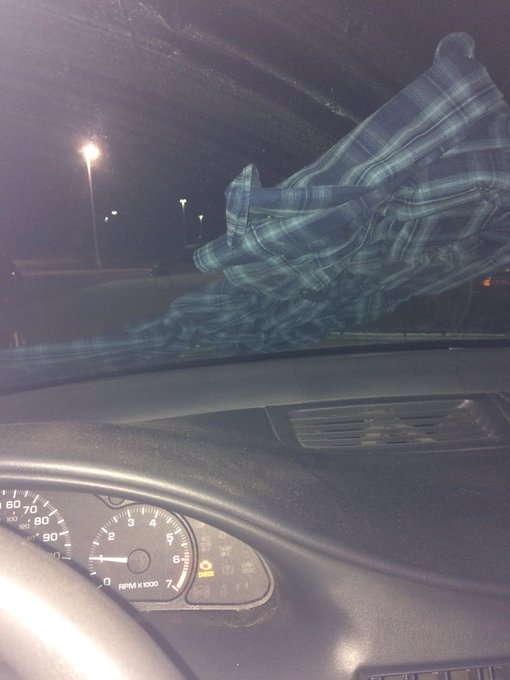 Ashley’s Facebook post soon went viral, gradually reaching the Flint Township Police Department. Erring on the side of caution, Sergeant Brad Wangler from the department contacted Ashley to ask more questions about the incident. The police also acquired surveillance footage from the mall.

“Nothing like this has ever happened before. There have been no other incidences like this. It’s kind of unknown as to what or why or who [did this],” Sergeant Wangler told CBS News.

The police managed to identify two men that were seen putting the shirt on Ashley’s car and questioned them.

According to Fox 26, the men told police it was a harmless prank and that they didn’t realize that leaving items on cars’ windshields could be seen as a human-trafficking ploy. Because the men were also seen leaving the parking lot more than an hour before Ashley got to her car, the police have thus far concluded that no crime was committed.

As for Ashley, she is just glad she followed her instinct and drove away right away.

Please share Ashley’s rather scary experience with everyone you know to warn them to be careful out there!