A hilarious letter written by a teenage boy explaining why he didn’t do his homework is going viral this week.

Edward Cortez, 14, was asked to write a letter to his teacher explaining why he did not do his homework assignment. In the letter, Edward argued that he did not do it because he only “does what makes him happy” and does not want to end up having gray hair like his mother does.

“I didn’t do my homework because I don’t want to do school work over the weekend because it’s a stress-free time to go out with friends, watch TV and play games,” Edward wrote. “I don’t (sic) do it also because it makes me very mad and unhappy. I do what makes me happy because I want to be happy plus my mom has been finding gray hairs, not trying to stress out dog (sic).”

“The real world jobs don’t give you homework unless you’re a boss or teacher,” he continued. “Homework is not a real thing in the real world so we should not have to do it in school because it’s not useful. Case closed, the court rule in favor of Edward Immanuel Cortez in the case of student vs homework.”

The letter was shared to Twitter by Edward’s father’s cousin Lydia, who wrote, “So my cousin and his wife got an email from their sons teacher. He didn’t do his hw so she asked him to write a paper saying why he didn’t do his hw and this is what she got..” 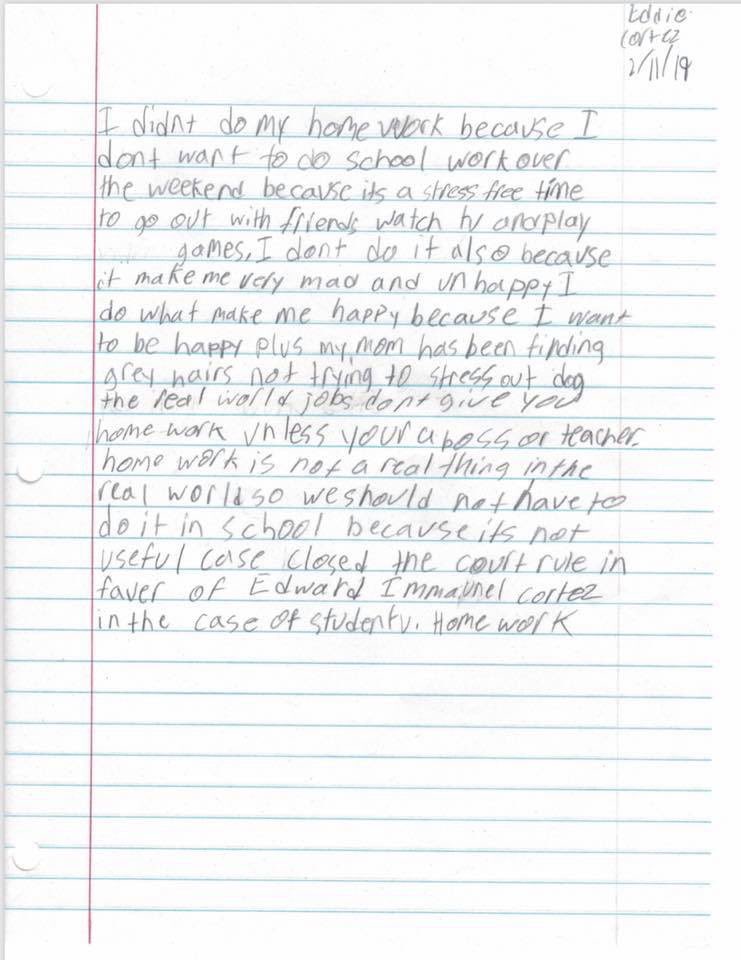 The letter quickly went viral, with social media users everywhere getting a big kick out of it.

“At least he is being honest about it!” one social media user wrote, with another adding, “This is hilarious. I wish I had known decades ago that I’m not supposed to be bringing home work in my real-world job. Who knew?”